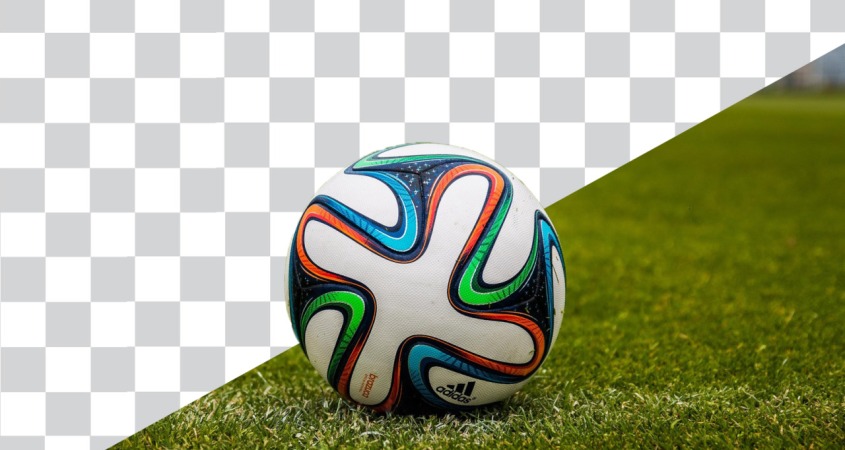 Have you ever wanted to use an image for a project, you import it and are ready to use it but that when you realize what a minute why does it have this white background? How do I get rid of that? Well in this video I’m going to show you several examples of how you can cut out an image in photoshop, as well as removing entire backgrounds.

There’s probably hundreds of ways to actually go about this in Photoshop, but Id thought I’d show you a few examples of how this can be accomplished. Alright, let’s dive in!

So the first step would be to find the magic wand tool, in the tool bar to the left. And if you right click and hold down on the tool, it will give an option to choose from three different tools. We already have the magic wand tool selected, which is the one we want to use.

Next step is super simple, just hover over the white background and click on it. This will create a dotted line, or marching ants as some people call it, and this represents the area you want to remove.

And then using a keyboard shortcut, Ill press command x to cut out the background. So the checkered background means the image now has a transparent background. ANd then I can do the same for inside the 5 to make it transparent as well. So that was a very straight forward, easy example. Let’s go to move onto another example.

Ok so I have the Nike logo here, and at first glance it seems like I could do exactly what I just did with the htm5 logo right? I can just use my magic wand and select the white background and get rid of it? Lets see what happens.

Well we get a black background, not what we wanted. Why is it doing that? Lets look over at our image layer, and you can see there’s an icon of a lock next to it. Which means the image cannot be changed. Most of the time you can just double click the lock to unlock the layer, but in this case it still isn’t going away. So I’m gonna press command z to undo what I just did, and command D, d as in dog to deselect.  .

So what we need to do is go up to Image, and select mode. Click on RGB color, and then well need to go back to our lock on the layer and double click to unlock it. Now I can select the white background and using commad x, I can delete it. Now you can save this image as a PNG, and it will have a transparent background.

So those were two easy examples, lets go to a somewhat more complex example. Ok so we have this basketball hoop on a white background and the netting creates this a more intricate object to cut around. So this isn’t going to be as easy as using the magic wand, but lets try anyways and see what happens.

So I selected the background and pressed command x, and it removed the background but also a large part of the netting. Which obviously inst good. There’s a couple of ways to get around this, but first I’m going to hit command z and command D to undo and deselect.

We can try using the magnetic lasso tool, which does what it sounds like. It acts like a magnet sticking to the object you want to trace out. And it does a decent job, but once you get into the lower part of the netting it’s gonna have trouble tracing to the object. You can right click to add points along the path, that helps the magnetic lasso around those complicated areas.

And so I’m gonna connect my loop here, and if I hit command x, you can see it did a pretty good job of cutting around the netting. However, I think there’s an easier faster way to do this.

So now when we go back to our magic wand, and select the background, it has no problem at all removing it. And if you’d like to go back to the original contrast, you can always go back up to curves and change it to where it was.

But for now I’ll leave it where I had it, and then using the magic wand you can select the areas inside the netting to remove those. I’m gonna not gonna do each and every one because that would take awhile, and I think you guys get the idea.

Ok lets move on to our final example, so we have a picture of a ball that we can want to cut out from the background. But the background in this case is no longer a white one, but it’s got all these other elements to it, with the grass and the stadium behind it. So how do we separate the ball from the rest of the image? Magic wand works great when you have a background and foreground elemetns that are highly contrasted from one another, so it can easily separate the two. But in this case, I don’t think magic wand is going to work very well. But let’s try it out and see what happens…

Yeah it’s not gonna work, so we need to try another tool. So let’s go back to magnetic lasso, and trace out the ball like we did before with the basketball hoop net.

Make sure you have this icon selected, of the two squares merged together. Basically what that does is it allows you to make additional selections with your magnetic lasso, after you’ve traced all the way around the object. I’ll show you what I mean.

So Ill just check around the ball if there’s any spots I can fix, and I missed this one area here. So Ill retrace the line and then connect the dots here. That will add my newly traced line into the main one I just did a moment ago,

Nest well add a masking layer, you can find that in the lower right corner of photoshop. It’s the icon that looks like a rectangle with a circle inside of it.

So that right there did a lot of what we needed already, pretty much everything in the background is gone now. We do have some grass in front of the ball, and we need to smooth out our mask but it’s starting to come together at this point.

We can adjust the feather settings to about 0.5, and that will smooth out the edges of the ball just a bit.

Then we useing the paint brush tool, we can actually paint out or paint back in parts of our mask. So making sure we have black selected, and then Ill change my brush size to a smaller one that gives me a bit more control as well as selecting the soft edges.

And then simply by painting the sides you can smooth out the edges of the ball. And if you go to far, you can switch the paint brush to white, which will bring back the image when you paint over it.

Again this doesn’t have to be perfect, going to down to each and every pixel. I’m just kind of going over it lightly.

And I could spend a lot of time really getting this perfectly rounded, but in the interest of time, I’ll go ahead and show you the next step. ANd that is finally getting rid of the grass in front of the ball.

Photoshop has some really powerful tools, and this next tool maybe up there in it’s incredible ability to hide imperfections. So let’s say you wanted to get rid of some of the dirt or blemishes on the ball, you can use the spot healing brush tool. So I’m gonna select that tool, and then Ill make sure that my image is selected and not my mask,

And you can just find any spot you want to cover, click and drag your mouse over that spot. And the spot healing brush seemlessly blends over it. And then you could spend some time going over the entire ball getting rid of any spots you want to.

But lets see how this works with the grass. The spot healing brush can work here, but sometimes when you have a lot of different color patterns and objects, it might end up warping the image and youll have to use another tool.

So lets use the headling brush, which is right under the spot healing brush. With the healing brush youll need to sample from an area you’d like to copy (by hitting the option key) and that’s so that you can paint over blemished area with it.

So that’s working okay, but let’s try the clone stamp tool. And this is simular to the healing brush in that you need to sample an area you’d like to copy from first by hitting the option key. And then painting over the blemished area.

And this does what it sounds like, it’s cloning the area you copied, so ill just get rid of all of this grass here.

And then lets go back to the spot healing brush and see if that works here. Yeah, worked out pretty good!

Then finally Ill just touch up the bottom of the ball here with the paint brush, and selecting my mask. And yeah ill just smooth this out really quick, and yeah there you have it. There’s four examples of how you can cut out an image in Photoshop.

What tool you guys use  to cut out images the most? The magnetic lasso? The Magic wand? Or possibly another tool? Let me know in the comments below!

My Tweets
Advertisements
Join 20 other subscribers