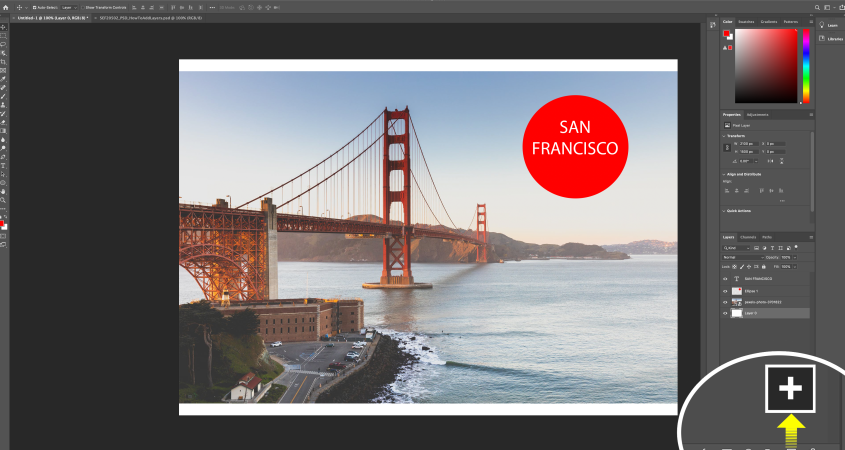 In this post I’m going to show you how you can add layers in Photoshop!

Hey guys, my name is Scott and I make full and mini tutorials like this one on Photoshop, Premiere, and posts on Freelancing tips. So please do consider hitting the follow blog button at the top right of this page so you don’t miss any of those! Ok let’s get into how we can add layers in Photoshop.

Since this is a tutorial really aimed at beginners in the program, I just want to quickly go over what a layer is in Photoshop for a moment. If you’re already familiar with Photoshop and just want a quick reminder of how to add in a new layer, jump to the fifth paragraph in this article where I start talking about the different ways you can add in layers. So I like to think of layers in Photoshop as kind of like a stack of papers. Basically, imagine you had a piece of paper in front of you with a picture on it. If you were to place another piece of paper on top of that first paper with an image, it would cover the image. So you would be layering over it, and if you added a bunch of papers on top of the first piece of paper you’d have a whole stack of layered papers on top of the image.

When you open up Photoshop for the first time with a new document, you’ll almost always see a background layer listed. That’s because it’s your first layer, think of it as the most bottom piece of paper in that stack of papers that you’re going to add onto. So any new layer that gets added on top of this background layer, will cover it, and the next layer added to it would cover the one underneath, and so forth.

There’s a couple of ways to add a new layer, you can go up to Layer, New, and then select Layer. And a dialog box will pop up, but I’m just going to select ok because I can always go back and change these settings after it’s been created. Or down at the bottom right, you can select the square icon with the plus sign in it, to add a new layer. Or you can use the keyboard shortcut of Shift-Command-N that will add a new layer on top of the background layer and image layer that I had.

I want to add a circle shape to my project, and I’m going to select  Red in my color picker. Next, I’ll go to the shape tool and create a circle shape. So again, if I were to move this circle layer below the image, and background layers, you would no longer see it because it’s at the very bottom of the layer stack. By moving it to the top, then you can see it.

There’s a lot of different types of layers you can add to your project. As you just saw I created a shape layer, on top of my image layer. But you can also add in things like a text layer, which automatically creates one if I just select the type tool and start typing. You can also add an adjustment layers, which allow you to change or ADJUST as the name suggest the settings of layer (without impacting all of the layer beneath). You can add an adjustment layer by going to layer, new adjustment layer, and you’ll see a list of different adjustment layers you can pick from. I’m not going to go through all of them because that would take awhile to go through, but you get the idea.

And really, adjustment layers represent what is at the core of a layer’s purpose. It’s so that you can change and manipulate specific parts of an image, without impacting everything else in all of the other layers. Now, if you wanted to merge layers together, you can do that, by going to Layer, and at the bottom you’ll see a few options to merge layers together.

Merge down, will merge the layer that you currently have selected and combine it with the layer beneath it. So there was a San Francisco text layer above this Ellipse 1 layer, but now they’re merged into one layer. Merge visible, will only merge the layers that are currently set as visible, and not the hidden ones. Which you can control by selecting the eyeball icon next to the layers. And then flatten the image, will merge all the layers into one layer. I don’t recommend flattening images really ever, but maybe in some very very specific circumstances. Because once you flatten an image, you lose all of your layers and you cannot make any further alterations or changes. So I really would  try to avoid flattening if you can.

So that’s how you can add layers in Photoshop, what other issues are you guys having with layers? Let me know in the comments below, and I’ll see if I can answer them! If you’ve enjoyed this video, please hit the like button and feel free to share with anyone else who might also enjoy it.

For more information on Photoshop, Premiere and Freelancing tips head on over to my YouTube channel and my twitter page at ScottEFowler. Also, check out my other tutorial videos which I’ve posted on the right side of the screen here. Alright, that’s it for me guys see you in the next post!

My Tweets
Advertisements
Join 20 other followers